I was very disappointed to find that Bill was not on the same draft as myself - possibly the names were taken in alphabetical order.

We were packed fairly tightly into cattle wagons which contained two large heavy-lidded lavatory buckets, one for urine, the other for excreta. We did our best to ration the food to a slice of bread and a tiny piece of cheese on a per day. The journey was not the most comfortable or exciting of my life. We were continually shunted into sidings for hours on end. 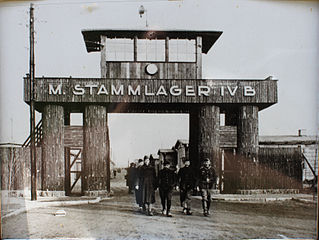 Then the guards would unlock and open the wagon doors to allow in air and light, for which we were very grateful. The train would eventually rumble on again and we would be lulled into a deep slumber by the melodic refrain from the tinkling of the lids of the lavatory buckets as the wagons swayed and rattled on.

We stayed for a long spell at the sidings in Cologne and the guards allowed us out of the wagons to stretch our legs a little. There was very little chance of anyone trying to make a break for it as we had been cooped up for three or four days by then. We were all very stiff and hardly able to walk let alone run. I was greatly impressed by the small expression of humanity by the engine driver who, possibly having a son of his own in the army and hoping someone would behave in the same way to him, showed some pity for us and emptied about half a sack of potatoes on the side of the railway track.

Being the nearest truck to the engine, we managed to snatch one each which we unashamedly devoured as if they were apples. Our next stop of any length was at Dusseldorf, where we had to change from a wide- to a narrow-gauge line.